Seek And You Will Not Find

A Story of Friendship, Love, Romance, Tragedy and Redemption on the rocky road towards Enlightenment.

The story concerns one man’s quest in the Himalayas searching for ‘enlightenment’, which explores life’s experiences that led him there, the souls he met on the way, and ends with a strange twist!

Robert, a Yoga teacher, in his late 60’s, has been seeking a spiritual path most of his life. Having gone through romance, tragedy, loss, and eventual burn out, he finds himself drawn to a trackless forest in the Himalayas. He takes a fall, and is badly injured, with little hope of being found. Was he drawn there? Or, is it just another fruitless quest? Robert is about to find out.

Jai, 28, has lived with his Swami for most of his life. His spiritual path is set, but, deep inside worldly yearnings are beginning to surface. Memories of his parents, and of his childhood friendships, are beginning to disrupt his disciplined life and normally focused mind. Can he overcome these feelings and eventually fulfill his destiny of becoming the Swami?

Robert and Jai find themselves travelling along paths they never intended, meeting challenges that were unexpected, and coming face to face with buried memories and emotions, and with the enduring power of love. 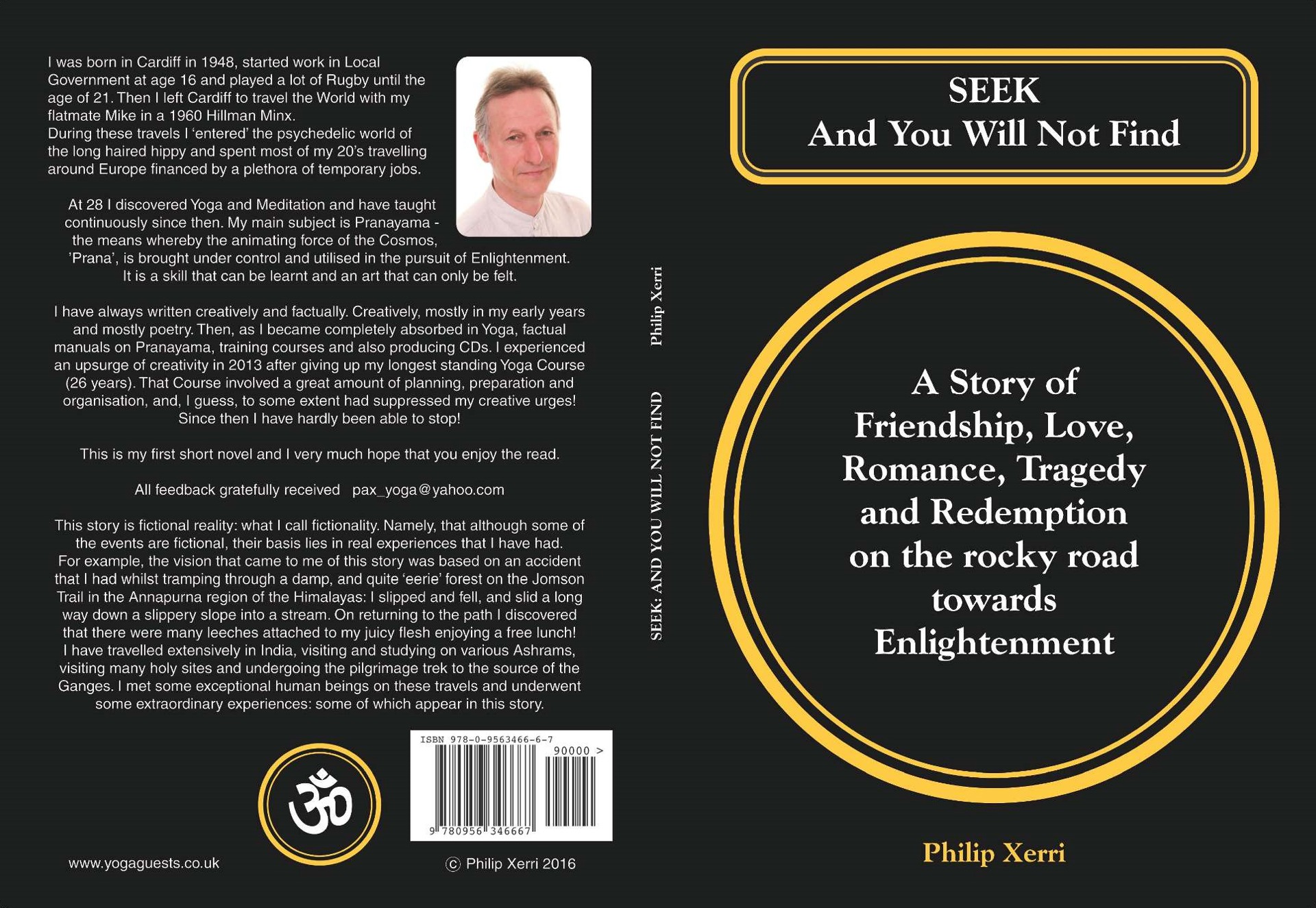 High in the Himalayas are hidden many secret sanctuaries of ancient wisdom. They are found by seekers who have been given guidance from authorities both real and imagined. That guidance had somehow found its way into the deep corners of my mind and secured a place to hibernate. A place, so deep below the surface, it was left untouched. But, like a seed, once planted, it inevitably germinated and grew, and that is how I came to be tramping through a forest in the Himalaya, in my early 60’s. My life had evolved from long time ‘hippy’, to Yoga teacher; from ‘burn out’ to spiritual seeker once again. The burn out had kindled that hidden seed which was now blossoming in my brain and somehow, I believed, guiding my steps.

I had not deliberately sought out any direction. I had arrived in India and followed my ‘instincts’: attended a few Ashrams; met a few Gurus; bathed in the Ganges and traveled the long road to Badrinath seeking the source of that Holy River. But none of these experiences had fully touched my soul. They had fueled the search: but that fuel was now spent. There was no direction left. Thus, I relaxed away from searching and eased myself into listening, and so, with that letting go of seeking a path to tread, the path found me.

I was however, beginning to wonder why that path was in this wet and humid forest not that far from an area frequented more by trekkers, than spiritual seekers. They do say that there are no answers: just the right questions; and maybe, just maybe, standing there, more or less lost; soaked to the skin; surrounded by an almost impenetrable legion of trees; the question surfaced, and an answer came – my foot slipped on the wet undergrowth. I fell. I slithered down a long slope clutching at branches and brush trying to slow my steady progression into the unknown.

There seemed little hope of survival, tumbling down that long slippery slope, crashing through the undergrowth, bouncing off trees, hitting stones and fallen branches; far enough off the beaten track to have little chance of being found. Images surfaced in my head: calm, steady images that flashed before my eyes but somehow seemed frozen in time; timeless.

Images of a young boy playing football in the streets around my parents’ two bed terraced house in the urban sprawl of Cardiff; my first job working in the City hall, suit and tie, catching the red double decker bus into town; playing cards in the local pub, three card brag mainly, always for money but with the stakes never very high, but enough to inflate adrenaline levels. Leaving Cardiff, early twenties, to travel the world on a rain soaked Saturday afternoon at the central bus station, with friends and family waving goodbye – all with mixed emotions. ‘Turning on’. Drugs, and descent into confusion and paranoia. A young man, mid-twenties, with very long hair, bearded and with holes in his jeans (real holes that is), on the dole, and going nowhere. Salvation through meditation and Yoga. Clean shaven, short hair, bright eyes, upright posture, and feeling good, in my thirties, forties and early fifties. ‘Worn out,’ teacher syndrome in mid/late fifties. Outward appearance still looking good although inside, mentally worn and emotionally washed out.

Who knows how it happens: that fall from grace; that physical and mental lethargy slowly engulfing all the enthusiasm and drive. My feeling is that it is much easier to fall into repetition than to be forever creative, and repetition, whatever it is, whether it be profound or pedestrian, can often lead towards monotony. And once the two have met – repetition and monotony – they form a spiral that descends towards a fathomless plateau wherein the landscape becomes virtually featureless.

That plateau is, of course, punctuated with wonderful times: watching and feeling students’ progress and mature; seeing them develop an inner strength and purpose; being able to guide and give succour when needed. In many ways just simply providing a regular space where folk from all walks of life know they can come and relax; let go of stress; step outside the pressures of life and simply ‘be’, without any demands. It can definitely be a healing space on the physical, emotional and mental levels wherein students may occasionally begin to feel at a deeper level and touch a part of themselves which is ‘sublime’

The final images in this progression through my life were expressed in visions of love and despair: the last of these being a beautiful face, smiling, and then disintegrating into a black hole.

Who knows how long that physical plunge down a tree covered slope took? What I do know is that it was timeless. The mental journey passed through a lifetime, and yet, was somehow condensed inside a physical measure of no more than twenty seconds. Mind over matter! The mindscape exerting its timeless powers over the landscape.

I was lying in a shallow stream, at the bottom of a small ravine: no way out but up. Assessing my physical state, I was certainly cut and bruised and with severe pain in my right shoulder and right ankle. On moving at least it became obvious that there was nothing broken. The shoulder was severely bruised and the ankle badly twisted. Better than broken but not exactly helpful considering my situation. Although an instant of clarity had allowed me to assess the situation, the shock of it all was beginning to take its toll. My mind was beginning to freeze; the water; the trees; the mossy stumps; the sky; my memories were all fading.

“That old sorcerer has vanished
And for once has gone away!
Spirits called by him, now banished,
My commands shall obey.”

The cave was dry and small. No electricity or running water: candles and wood provided light, heat and cooking facilities. Young Jai collected the said firewood and did the daily trip to the stream for water. In fact, he also did the cooking, which meant foraging and trips to local villages for provisions. Jai, now 28, was given away to the local Swami aged 6 and he knew no other life except attending to the needs of the holy man whose cave he had lived in for the past 22 years.

Jai slept near the entrance: his master in the centre. He attended to all of his master’s needs and listened to his Swami’s daily lessons. He did his exercises and meditated at sunrise and sunset. He learned by heart many of the ancient texts and could recite them rhythmically when called upon to do so: their meaning however often alluded him.

There were frequent visitors to the cave consulting the holy man about auspicious dates for births, marriages and other important occasions, for blessings, and, of course, for spiritual guidance. The Swami was a good man, but with, perhaps, one significant flaw, he was, essentially, traditionally hidebound. He had been, like Jai, given away at age six; he had learned to recite many of the texts by heart; he was regarded as a Master of the minutia underpinning many of the complicated rituals; he was knowledgeable concerning Astrology and Numerology – essential in being able to ascertain auspicious dates and places in people’s lives. He was, however, occasionally inflexible in his adherence to the teachings, and that rigidity, he was now passing on to Jai.

Jai, however, had begun to feel a longing for something he could not describe. It began one day whilst collecting water from the stream. An incredibly beautiful dragonfly had landed on a large leaf where the stream had formed a pool. Its beauty was intense.

Then, suddenly, a long wet tongue shot out from the corner of the leaf where a froghad remained motionless. The dragonfly was snatched and drawn into the open mouth, where it was chewed and swallowed. He watched the scene unfold. It was over in an instant but that movement from the delicate beauty of the dragonfly to its sudden death caused a sickening shock in the pit of his stomach: it also touched a tender, and still raw, spot inside his heart. What was the point in being able to recite the texts and follow laid down rituals of tradition without the feeling, the understanding, of the randomness of life and death!

That tender spot was, of course, related to his Mother. His thoughts often used to dwell on that day when his mother hugged and hugged him tightly to her breast whilst the tears flowed down her cheeks and fell into his hair. He still sometimes remembers the dampness of those tears spreading through his hair. Tears: that human expression of mixed emotions which can range from despair to utter joy. He could not understand why his mother was acting so ‘clingy’, so outwardly expressive. It had only ever happened when he was ill, or injured, and in need of succour. This was, as far as he knew, an ordinary day. Then, that moment when his father gently removed him from his mother’s embrace, and, hand in hand, they left their home never to return; never to see his mother again.

New Novel "SEEK And You Will Not Find" Out Now!

A Story of Friendship, Love, Romance, Tragedy and Redemption on the rocky road towards Enlightenment

Pranayama is initially the process whereby this immense energy is accessed directly by the systematic application of structured breathing practices. Continuing Pranayama practice then utilises this connection with the primary cosmic force to profoundly influence the individual on all levels - physical, emotional, energetic, mental and spiritual.