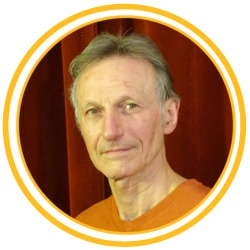 Philip Xerri was born in Cardiff, Wales in 1948. He was an accomplished athlete and rugby player in his youth. He became a ‘wanderer’ in his 20’s and then aged 28 walked into a yoga class run by Philip Jones in Cardiff. This was a major turning point. Since this time Philip has continually practiced and taught Yoga and Pranayama throughout the UK and Europe. He founded Yoga Quests in 1986.

Philip studied yoga and Pranayama with Dr. Swami Gitananda in India 1980/1981, graduated with an honours degree in Comparative Religion 1984 and a Post Graduate Certficate of Education in Religious Studies 1985. Philip has experienced many different schools of Yoga, qualified in Remedial Massage, Reflexology and Touch for Health. Philip has run Yoga Quests for the last 25 years.

Philip has also written Manuals on How To Teach Pranayama, a short fictional novel based in India entitled  “Seek And You Will Not Find” and has also produced a CD of Yogic Poetry and Stories which aim to portray various ‘spiritual’ concepts in new and different ways – often with a humorous twist!

New Novel "SEEK And You Will Not Find" Out Now!

A Story of Friendship, Love, Romance, Tragedy and Redemption on the rocky road towards Enlightenment

Pranayama is initially the process whereby this immense energy is accessed directly by the systematic application of structured breathing practices. Continuing Pranayama practice then utilises this connection with the primary cosmic force to profoundly influence the individual on all levels - physical, emotional, energetic, mental and spiritual.